He wears a mask like Yo! on the Gong Show 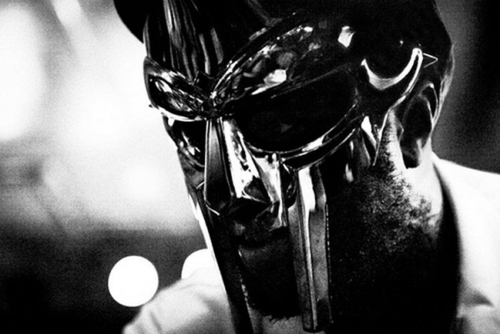 MF DOOM, DOOM, Madvillian, JJ DOOM, Viktor Vaughn, Metal Fingers, Zev Love X, King Geedorah is a hip hop rapper/ “super producer” from  Long Island, New York.  He began his career in 1991 with the rap group KMD and appearing at multiple open mic sessions with a stocking cap over his face obscuring is facial features.  Soon after, he took on the persona MF DOOM after Marvel comic books villain Doctor Doom and since then is rarely seen with out it. Either it be a media appearance, concert tour, or a picture with a fan, he wears his metal mask. In 1993 his older brother was struck by a car and killed on Nassau Expressway while crossing it and for a period of time DOOM left the hip hop scene. In 1997, he came back with vengeance stating that he was swearing revenge “against the industry that so badly deformed him”.  His strange appearance also reflects his music. Usually his music is chock full of unconventional hip hop beats, and a rhyme approach that is very hard to label. It’s almost like he rhymes in patterns or in a off beat manner that somehow magically compliments his production. DOOM is truly one of a kind and is not for the faint of heart or those that label themselves as “normal“. Not only does he talk about issues people typically ignore in rap music such as, stereotypes and male chauvinism, he mocks it. He is a reflection of how weird people can be sometimes .   He represents being an outcast, he lives in the underbelly of all things strange and he’s hear for you to listen.